Contributing to the project

a (hopefully) simple and straightforward guide

General guidelines for submitting your recordings: – Updated on 11/11/2019

Only Mega Drive Model 1s are accepted (the large ones).

* = those consoles need a small modification documented here (credits to dogman91 for the clear picture). My own modification here. Make sure to use high quality parts. Once modded, those will yield the best possible sound out of a Mega Drive.

Insert a game/flash cartridge in your Mega Drive, turn it on and get to a part where there’s absolutely no sound or music playing. No video cable must be connected to the console.
Record 10 seconds of silence and watch how loud is the background noise.
On a 24-bit scale, if it’s -60dB or less you’re ok.
-57dB is acceptable.
At -55dB it will start getting noticeable and anything more won’t be acceptable.
You must send this 10 seconds silence file to me for inspection along with the other tracks. No exceptions. If you don’t, your contribution will get rejected.

Pro-tip: When recording, make sure to try isolating the console as much as possible from anything else. No video cables connected and try putting the console away from potential sources of interference (examples: PCs, monitors, mobile phones, etc…).
Always use shielded cables.

So, what’s the big deal about clipping? Clipping means you’re sending a signal to the recording interface which is too strong thus overloading the circuitry and leading to bad distortion. You *MUST* avoid this at all costs and the solution is simple: lower the source volume.
You’ll be recording from the headphone jack, which means you’ll have a handy volume slider. You’ll always want this set to max volume, but if you’re clipping, slide it slowly down until it doesn’t clip anymore.
If you use Audacity, you’ll clearly see clipping because there’ll be a red bar.
Sometimes there will be a very brief spike on inaudible sounds which may clip. Those are the only exceptions and are ok.
To put it short, this is acceptable:

And, as a good practice, always leave some headroom in your recordings. Volume knobs exist for a reason.
I’m giving this tip because when we’re downsampling 96Khz 24bit to CD quality at 44.1Khz 16bit, we’re reducing the dynamic range available and tracks which are very near the clipping point might clip at the lower sampling. Not a big deal because this is all handled by the converter during the process, but it’s always good use to leave just that tiny bit of headroom free.

There are all kind of recording interfaces out there, but we can separate those between two big and very important categories: those which have a volume control and those which don’t.

One final note: please be aware of the difference between hardware and software volume controls. Since this document is already pretty long (and boring) I’ll make it short:
Hardware Volume = Good (use this)
Software Volume = Bad (don’t use this)
Finding out if your recording interface has an hardware recording volume control should be pretty easy because those recording interfaces will have a physical knob or something like that.
In the case of PCI Audio cards, the situation gets way more complicated because they *might* have a hardware volume control which you can operate via software (ugh) but you should dig into the sound card specs/manual hoping to find some hints.
If I were in this situation I’d probably just set the recording level to the max on the Windows mixer/macOS Audio MIDI Setup/whatever you have and adjust the volume on the Mega Drive and call it a day.

Here’s the template you’ll be using: just paste the cover onto it so that it blends well and you’re good to go. If you want, feel free to add your own name/nickname somewhere on the cover, just do not make it huge (look at the “Community Release” font, do not make it any bigger than that, please) and try putting it into the upper right or lower right corner. 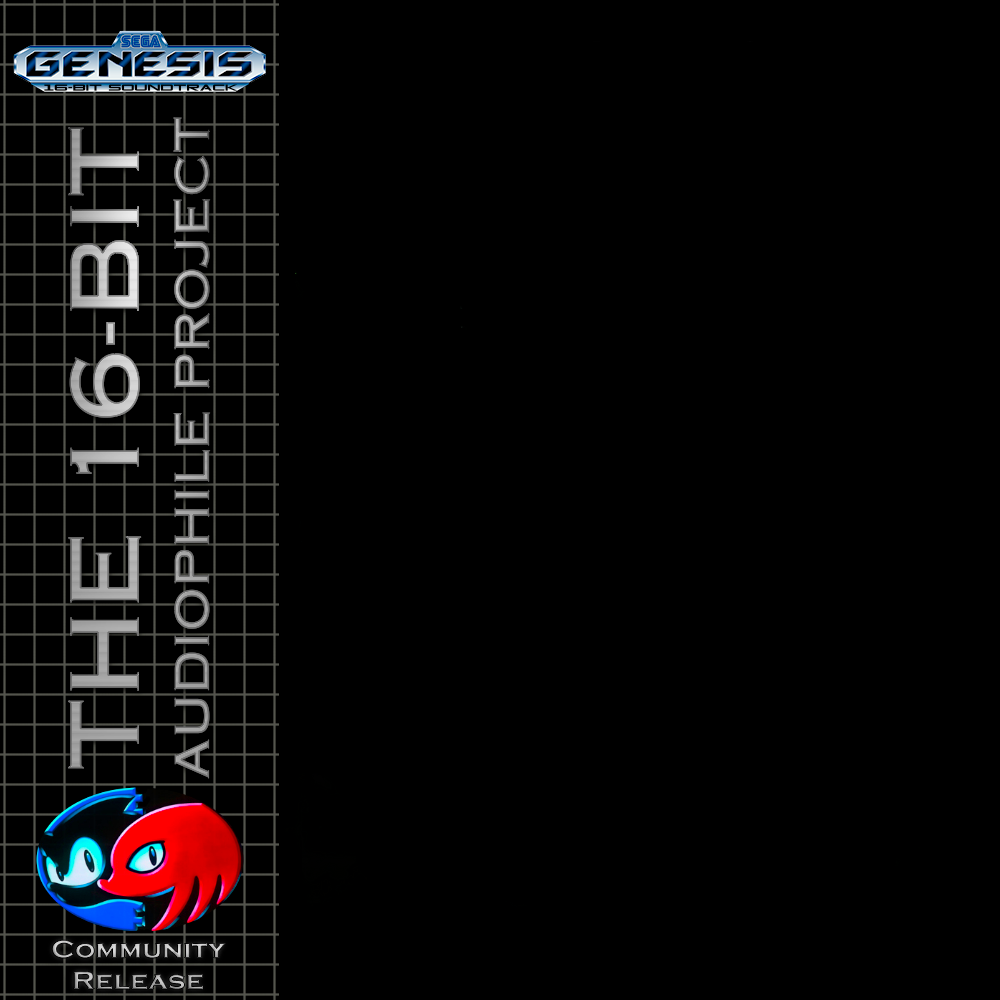 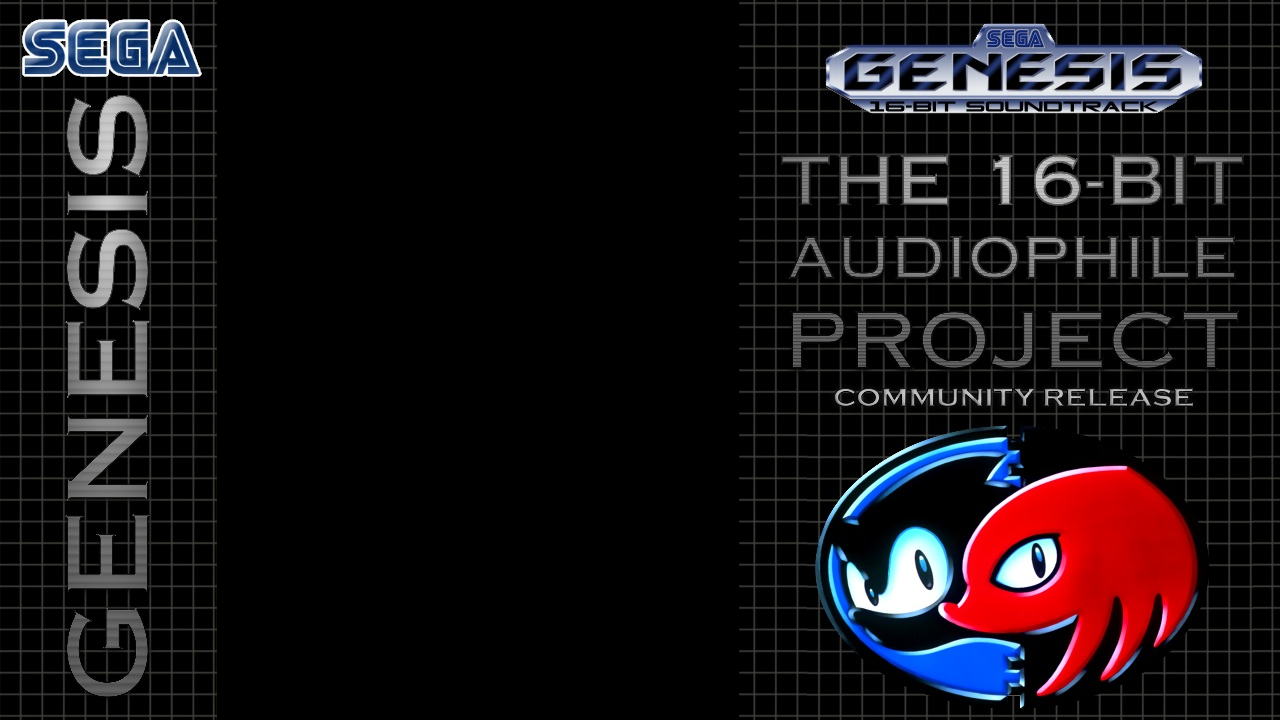 This is the software we’ve been using to play back all the music natively on the Mega Drive and without video interference: VGM_Play
This is a modified version of Deadfish Shitware fantastic VGM_Play which was done exclusively for us to attain perfect timing.
The usage is pretty simple: it’s a windows software you unpack with WinRAR, start VGM_Play.exe, select Rom Builder, Add Tracks (which will open an explorer window where you can select vgm/vgz files) and then Build Rom and you’ll have a VGM_Play.bin file in the same folder which is the ROM you’ll have to put into your flashcart.
Please, use only Project2612.org VGMs as those are the most accurate ones.

If you want to rip the music straight from the game cart that’s ok as well, but you may have some extra noise due to the CPU working harder.

Phew, that should be all!
This guide will be probably updated over time so make sure to keep checking it from time to time.
Also, please note that as of 11/11/2019 we don’t have anyone checking the tracks, so make sure that you’ve done things properly.