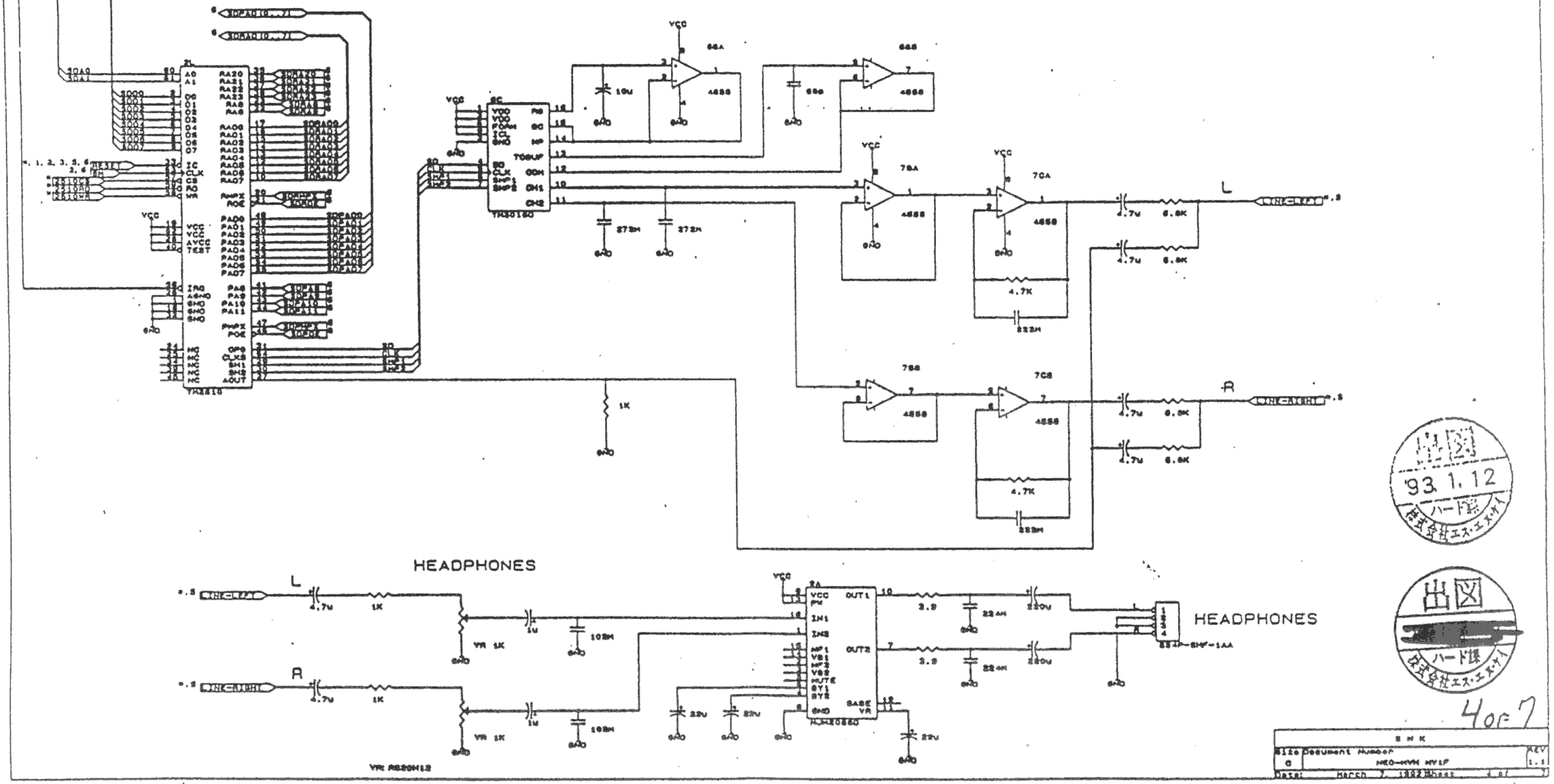 After one more poll on Twitter, it seems like there’s enough interest to go ahead and write a proper article about how we’re recording music from the Neo Geo instead of just a quick document in the FAQ (which is going to be a shorter version of this and it will still be made).

I think it’s fair to start with a premise which I know is going to be a major let down for lots of people: there are several games on the Neo (especially the newer ones) which are basically made of just mono-aural ADPCM samples.
It’s PCM, there’s nothing else to this. Games which have their soundtracks with only ADPCM are Metal Slug 5 (maybe even 4?), Matrimelee, the newer King of Fighters (I believe from ’99 onwards), Blazing Star (and I have to check Pulstar) and many others.

Those games won’t be recorded because it’s absolutely pointless.
Just listen to them in an emulator or in M1 or what have you, you’re going to get exactly the same sound as from real hardware (minus noise and hiss).
I could make digital rips of them, but that’s not the point of our project, so they’re going to be left out.

This said, let’s get down a bit to the technicalities.

First off, the Neo Geo was a very particular platform having the (almost) exact same hardware for both the arcade boards (known as MVS) and home console (known as AES). Both were released at the same time so SNK definitely had this plan in mind from the get go, although it’s indisputable that their main target were arcades and home consoles were just a way to get extra income. After all, most of their games (with a couple of exceptions) were all coin-ops which needed credits to play and the AES versions had minor modifications to have basic menus but were otherwise identical to the MVS ones with Free Play enabled so that no credits were required.

This has led us to choose an arcade board as a platform to record the game from (and because AES systems costs almost like a new car) and this opened another whole range of issues: several MVS boards have been made and they were all different, some having 2, 4 or even 6 slots and others having no line level stereo output (remember that the JAMMA standard has only amplified mono output which goes straight to the speakers – the MVS used a slightly different JAMMA layout which added the possibility of stereo amped audio and a fourth control button for each player side).

Much like the Mega Drive we were once again confronted with a choice: which hardware version of the MVS should we choose?

Unfortunately I couldn’t find much information on which boards were produced first (remember that the first hardware produced will always be our target), but this page from neogeodev seems to hint that “A” boards were produced first, followed by B, C and then, maybe F (made by Fujitsu). There are also boards which do not have a letter at all and those might be the absolute first to be produced and our preferred choice.

Obviously what we are concerned most with is the audio circuitry and luckily, unlike the Mega Drive, all the MVS hardware used the Yamaha YM2610 and YM3016 so it’s all a matter of studying what was used in the audio output circuit.
Looking at board scans kindly provided by mvs-scans, we can see what a MV1 (possibly the first board revision produced) was like and, comparing it to the MV1FS for which we have an actual schematic, thanks again to neogeodev, we can see that they share the same audio output using a pre-amp section with 3x 4558 opamps and a JRC 2066D headphone amp (much like the Mega Drive, although it uses a Sony CX1034P headphone amp – the MVS head amp is much more powerful!).

I already had a couple of MV1FZ motherboards so I decided to pick one and gut its entire audio output stage and replace it with the same one found in the MV1 (4558 and 2066D are still available today) so that we had basically the same board audio-wise and that was pretty much it.

Now I’d like to take a moment to give a big shoutout to Razoola and his Unibios because without him the rips we’re putting out wouldn’t have been possible: with the Unibios you can reproduce all the music in any game thanks to its Jukebox function and the best part is that since the game is not actually running the noise generated by all other components is really really low (almost lower than our Mega Drive!). This proved to be a very, very convenient solution and made recording games from the Neo a far easier job than the Mega Drive.

Finally, the last part was trying to find the unitary gain to get all our release recorded at the correct volume and this proved to be a guessing game: I just picked the loudest game/track I know of which is the intro of King of Fighters ’99 (which is so loud that even by playing it back normally you can hear it sound distorted/clipped) and lower the volume on the headphone amp until it didn’t clip on the recording side.
And even then… when I was recording Metal Slug I found out that there was a very loud part in “Final Attack” which clipped pretty badly and I had to reduce the volume further.

Now, what about the games?
While a NeoSD would be the ideal solution, unfortunately I don’t have one and the cost is just too high for me, so I stuck to my trusty, modded/fixed 138-in-1 cart and, before recording, I used another tool from the Unibios which checks the ROMs for their integrity to make sure that they weren’t tampered with and, so far, all the games I recorded on the Neo checked out fine!
Remember that this means that there are several games (like Fatal Fury) which are not in the cart, so I won’t be able to record those.

And with that I think that I covered all the bases for what we’re doing to record Neo Geo music.

If I missed anything please make sure to let me know through our Forums or social media!

P.S.: a final note, just to reiterate something I already said in a previous post: we’re not giving up the Mega Drive releases, we’re just waiting for the new tools to be coded and tested. This whole Neo Geo thing is just a way to fill the void and give something to all of you who’ve been so kind to follow us so far.
This also means that we are not accepting requests for Neo Geo or other arcade hardware and not all games for the Neo will be released.