(This awesome comparison was made by Roareye in the game’s release thread and it thoroughly deserves to be a Featured Article on this website, straight to the front page.
I really hope this will also encourage other people writing for us: we’d love to hear your voice, every single opinion matters and helps us growing and getting better.
Thank you Roareye, I hope to read more from you!) 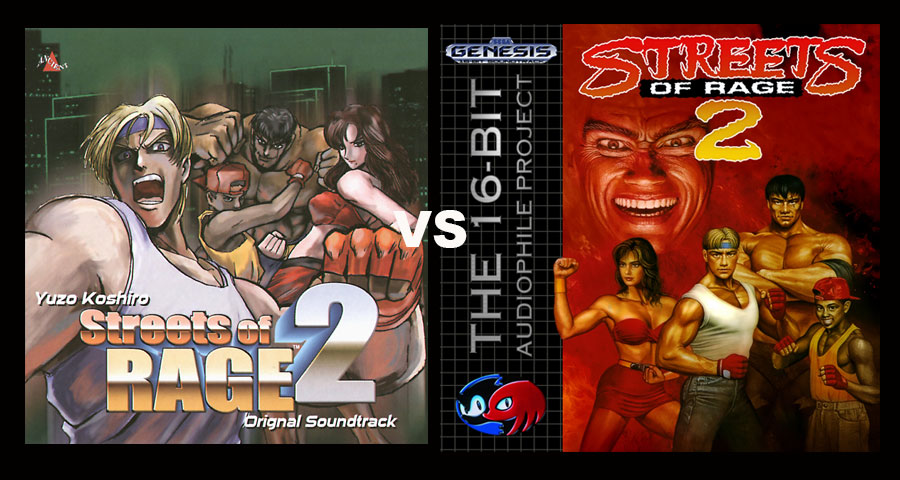 It’s fair to say Streets of Rage II is a personal favourite of mine, and likely of many other people here. The late 80s house/early 90s rave themes are quintessential to the atmosphere of the brand and maybe that is partly why it is stuck in limbo now.

I own this soundtrack several times over. I’ll focus on the best two for this comparison (The Bare Knuckle remastered Soundtracks and the 16 Bit Audiophile version), however for information’s sake I’ve included the Yuzo Koshiro Best Collection vol.2 in the lineup of information.

As you can see the remastered soundtrack has the most tracks, however two of these are jingles (Game Over and Round Clear) which 16 Bit Audiophile has stated it won’t usually record. It’s surprising that the Yuzo Koshiro collection misses out Player Select and the Go Straight Remix which were both in the final game, but retains Walking Bottom which was the background music to the BETA Demo version.

For a start, we can forget the Yuzo Koshiro BEST COLLECTION Vol.2. It has the fewest tracks and has not been remastered, instead sounding like it has been recorded via emulation. The bass is flat, even in bass-heavy tracks like Max Man, and while the treble is bright and energetic the music overall feels as you’d expect from an average emulation. It’s lacking in depth.

Technically both Bare Knuckle and Streets of Rage II (As they will now be called respectively) have been remastered in different ways. Bare Knuckle attempts to clean up the audio to make it as high quality as possible while Streets of Rage II is recorded at the highest quality from a Mega Drive audio chip working at it’s best. Different approaches. I’ll take a few of the tracks they have in common and compare them.

1. Go Straight
This had to happen, really. Based on Inner City’s song “Good Life (Magic Juan’s Mix 12′)” this song has a fantastic late 80s Detroit House feel which fit the tone of the game brilliantly well.
From the start, the Streets of Rage II soundtrack offers better stereo separation, with the Bare Knuckle soundtrack sounding more restrained. There is a restrained audio line in the track, which can be mistaken for a mixing error of bass over treble on the Streets of Rage II track, but this is inherent in the song and this restrained line is in all the versions of the song I have.

Once we get to the 30 second mark, we have a heavier mix to deal with, with both treble and bass fighting each other for dominance. The Streets of Rage II track handles the two with ease, always staying in control and giving a depth to the club sound that is absent from other versions.
At the beginning of this segment, the Bare Knuckle track reveals what sounds like a digital flute playing behind the main beat and it becomes quite prominent. This same “instrument” appears in the Streets of Rage II track but it is slightly harder to hear due to the bass. This may become a subject of preference, but hearing more of a digital flute because a track is brighter and lacking in bass is hardly befitting of nightclub music. From having played the game it is clear that the Streets of Rage II track is more accurate, and it’s certainly more like a club track than Bare Knuckle, however I’ve referenced this difference so people can make up their own minds.

At the 1:00 mark, the music changes again. This time the bass kicks up and the treble goes to the background to add spice to a chunky bassline, almost disappearing entirely between 1:15 and 1:30.
With the Bare Knuckle track, the bass is still subdued, meaning it only gets a chance to shine when the treble completely dies away. Despite this moment, it never takes the chance to shine as the “thump” of the bassline is quiet and almost insignificant which makes the entire section feel like a tired gap from good music to good music – if there was a lift with elevator music playing between two floors of a nightclub.
The Streets of Rage II track excels at this point. The bass is chunky and fills the soundstage without suffocating the treble, and when the treble leaves, the bass carries on playing without refrain. Whereas in the Bare Knuckle track this segment felt like elevator music, in the Streets of Rage II track it sounds like a live bassist in a band still playing when the singer and guitarist have run off stage for a moment, the sound holding the crowd and performing well even with the rest of the band on a short hiatus.

While some may prefer elements of the Bare Knuckle track, I think it’s hard to justify any additional brightness in the treble against the huge loss of bass – in fact the loss of bass may be why it sounds so bright (Though it also sounds like the brightness has been enhanced). When the music is less busy, both tracks handle themselves well, it’ll be more preference as to whether you prefer a club-style bassline (Like the Streets of Rage II track has) or a bright treble (Will probably suit those with cheap headphone better). However when the music really kicks off, the contest is over.
Using the same source music, the Streets of Rage II track manages to hold a strong and steady bassline while losing nothing from the treble, whereas the Bare Knuckle track’s bassline nearly disappears when the music demands more. That segment where you hear only bass really does have the difference between elevator music and a live band, not in volume, but in energy.

This one will definitely be based on preference. However I’d still go with the Streets of Rage II track as the weak bassline on the Bare Knuckle track really sticks out horribly at the 2:00 mark.

3. Under Logic
Based on The Shamen’s “Move Any Mountain”, Under Logic is my favourite track from SOR2 and when I found out the two were related it revived my love for the rave/club music of the 90s.

Strangely, considering there were blinding differences in Go Straight even in tone, Under Logic plays much the same across both tracks. The Bare Knuckle track is a slight amount brighter and the Streets of Rage II track is a little bit better with bass. But otherwise the two are almost identical. There are moments where I would lean towards the Bare Knuckle track, if I’m honest. Complete preference.

4. Expander
One of the most aggressive tracks in the whole game, greeting your ascent in the lift of definite doom, Expander was arguably Motohiro Kawashima’s greatest stamp on the game. It’s also considered to be based on Praga Khan’s “Injected With A Poison (Adam’s Power Mix)”.

5. Max Man
Heavy bass, mixed with almost random instrumentation and sounds to build a epic track, with moments that harken to “This Sound Is For The Underground (E5 Remix)” by Krome & Time.

From the off we can hear a difference. There is almost a looming presence behind the bass in the Streets of Rage II version which is lacking in the Bare Knuckle track.
After the 30 second mark, the track does some strange warping effects with the bass and keeps the treble kicking. While both tracks handle the treble well, only the Streets of Rage II track actually handles that warping bass with any intensity. The Bare Knuckle track carries the sound, but it mutes it slightly to keep it in the background while it’s treble helps to carry the tune. The Streets of Rage II track doesn’t fear the bass, instead bringing it to the front and then beating it with treble.

Overall the tracks are both good, with the Streets of Rage II track being superior, until we reach that warping bass. Then the Bare Knuckle track is forced to hide the bass in a corner while the treble does all the work. Has the presence of a lead singer (treble) turning down their amazing guitarist/bassist because they want to be “the star of the show”. With decent control, there would be no need for the bass to be subdued on the Bare Knuckle track. The fact they did so, says that they either couldn’t figure out how to control the bass track or couldn’t be bothered. Either way is inexcusable for WaveMaster, and basically passes the victory hook, line and sinker to 16 Bit Audiophile.

6. GOOD ENDING
For the final track I’ve chosen a different type of track. Most of these are heavy club-style tracks. Good Ending is completely different, being the chirpy end tune. That should mean that the Bare Knuckle track has an advantage, but let’s see.

From the opening the difference in the tune is hard to pinpoint. For some reason the Streets of Rage II track sounds strong enough to be an actual pop tune of the era, whereas the Bare Knuckle track doesn’t. Maybe because the audio is flatter and lacking in depth of bass, but it’s not to an extent that you consciously notice it.
Once the track gets going, the two sound mostly the same, though there is something that pops that Streets of Rage II track out more than the Bare Knuckle one. Maybe it’s a subtle bass control giving the track more presence, I wish I could say. It’s annoying not to know how to describe it.

A big difference to be aware of on these tracks that IS noticeable, however, is track length. The Streets of Rage II track is 30 seconds longer. When listening to the “missing” audio it seems clear that 16 Bit Audiophile cut off the track after the loop point, so the music loops before fading away to give you the full track. The Bare Knuckle track fades away before the loop point, likely because the track ended at this point in the game’s credit sequence. Whatever the reason, it seems strange that a fully remastered soundtrack didn’t re-record to the loop point, as the audio clearly exists for it to exist in the 16 Bit Audiophile version.

OVERALL it seems clear to me that the 16 Bit Audiophile version of these tracks is far superior to those offered officially (And I’ll assume unofficially too). While there are one or two tracks where the difference is negligible (Under Logic), there are many more where the difference is practically night and day. Expander has never sounded so gripping, Go Straight has a true club-vibe to it with that bass, Back To The Industry which now sounds almost like a movie soundtrack and even slow tunes like In The Bar which now truly have that smoky feel to them.
If you’re uncertain of the improvements, I suggest you listen to Expander and you’ll soon have a change of heart.

16 BIT AUDIOPHILE – Currently the best release of the SOR2 soundtrack.